It’s no secret that federal agencies are encountering significant challenges in their cloud migrations. Challenges like the proliferation and management of an expanding universe of apps and endpoints are making it difficult for IT teams to identify what workloads are best-suited to move to the cloud. For others, the challenge is converging disparate legacy applications and systems into an agency-wide cloud enterprise without disrupting the user experience for government workers.

That’s why agencies are reevaluating their approaches to cloud deployments in the wake of the updated Cloud Smart Strategy, which provides specific guidance on how to foster greater cloud adoption and seamless implementation. But how can they combine this policy guidance with the right tools and strategies to successfully adopt cloud? 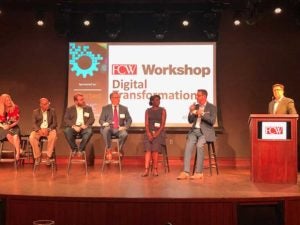 In a recent keynote presentation at the 2019 FCW Digital Transformation Workshop, I talked about how federal agencies can leverage automation and holistic network visibility to better understand the transition to cloud and how it affects application performance throughout all stages.

Migrating to the cloud is much easier when you understand everything that’s in your IT ecosystem, including networks, apps, devices and users. End-User Experience Monitoring (EUEM) is a key Riverbed solution that can help agencies combine top-notch application performance monitoring (APM) with automation and network visibility to not only evaluate what’s in the ecosystem but also how cloud migrations will affect application performance and end users—improving network speed by 41 percent and maximizing employee productivity by an additional 36 percent.

In addition to leveraging solutions like Riverbed EUEM, here are four best practices I have gleaned working with a number of agency partners across federal government. Use these to solidify your agency’s battle plan for moving to the cloud:

True digital transformation is comprised of more than just outcomes. Network and app performance are critical pieces to that puzzle too. With Riverbed EUEM and the right battle plan, your agency can make the most of cloud to further your efforts in Digital Transformation and empower your workers to do their jobs more efficiently and effectively.