Everyone has an experience with Windows reliability. As is the case with many things, we mainly remember the negative ones. Doesn’t it seem that your PC is slow to boot up just when you’re running late to a meeting you’re hosting? Does your colleague complain frequently that her laptop shuts down during a key presentation after only a few minutes on battery power?

If you’ve ever wondered about how your organization compares when it comes to the reliability of Windows computers, this analysis from SteelCentral has some answers. Its conclusions are based on real data from over a million desktops, laptops, and tablets from hundreds of companies around the world being monitored by SteelCentral running in the cloud. SteelCentral Aternity presents an accurate picture of cross-enterprise Windows Reliability, because our SaaS-based product monitors performance from the end user viewpoint, in companies of all sizes across multiple industry sectors. This perspective enables SteelCentral to provide insight into factors affecting digital experience, such as Windows reliability.

SteelCentral Aternity equips desktop services teams to identify and resolve device health and performance issues, proactively, remotely, and non-invasively. This enables IT to get out in front of issues affecting Windows reliability, improve end user satisfaction scores, and reduce trouble ticket volume and Mean Time to Repair. And Aternity provides the same type of capabilities for enterprise Mac environments as well. Watch this short video to see Aternity in action.

An introduction to Windows Reliability Monitoring

You can see the reliability score of your own computer by typing “Reliability” in Windows Search, and clicking View reliability history. This opens the Windows Reliability Monitor, which presents a blue line tracking the score of your Windows computer, along with a history of the events. 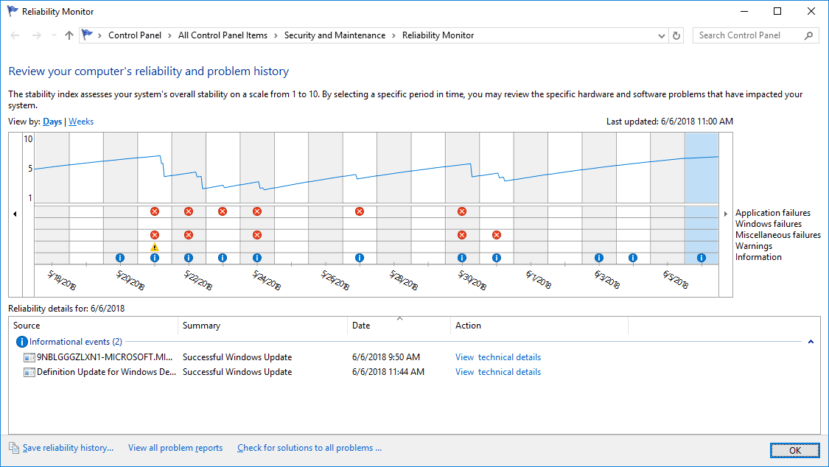 Windows Reliability for my colleague’s computer. Note the low scores between May 20 and 24 due to application failures and other miscellaneous failures.

The blue line rises and falls based on the cumulative reliability of the device over the lifetime of the system (or since the Windows Reliability Monitor was reset by the user). Recent events, or lack thereof, are weighted more heavily in calculating the score. 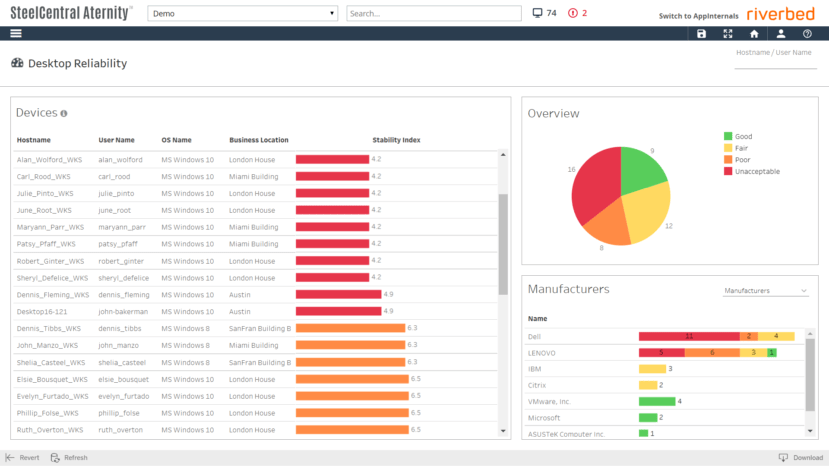 SteelCentral Aternity reports Windows Reliability by a variety of factors, such as manufacturer, device type, OS, department, or geographic location

As part of our Digital Experience Insights series, we compiled Windows reliability data over a two week period from about a million Windows devices running various versions of Windows 7, 8, XP, and 10. As a SaaS platform, SteelCentral Aternity monitors these machines across various countries, industries, and companies. The results below are derived from this aggregated reliability data.

As shown below, overall Windows reliability is fairly strong. About 25% of monitored devices have reliability scores of 5 or below. And over half of the devices had grades over 7. 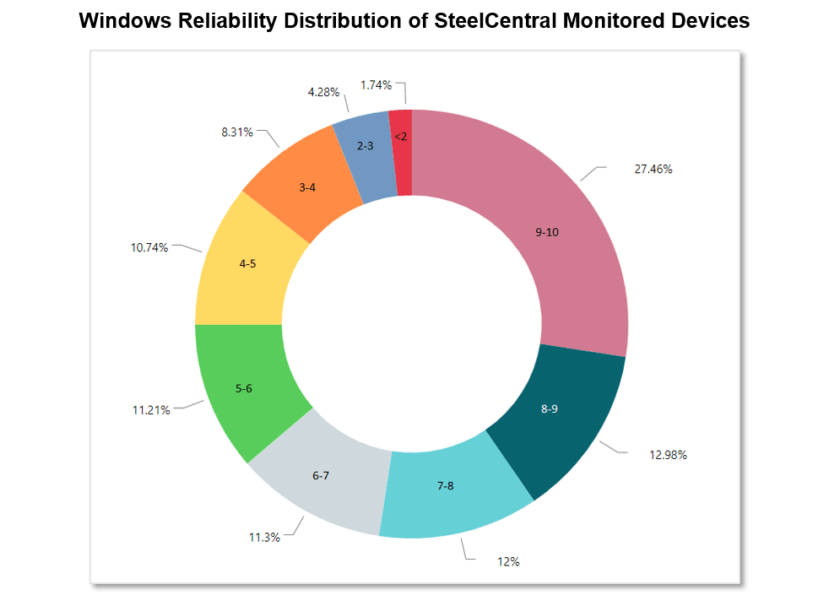 About 25% of monitored devices had poor Windows reliability scores of 5 or below.

Comparing the reliability of laptops and desktops

SteelCentral Aternity monitors every type of Windows device in the enterprise—laptops, PCs, tablets, smartphones, and virtual devices. We analyzed the reliability scores for the different types of computers. We found that although laptops are convenient, they’re about 10% less reliable than desktops. 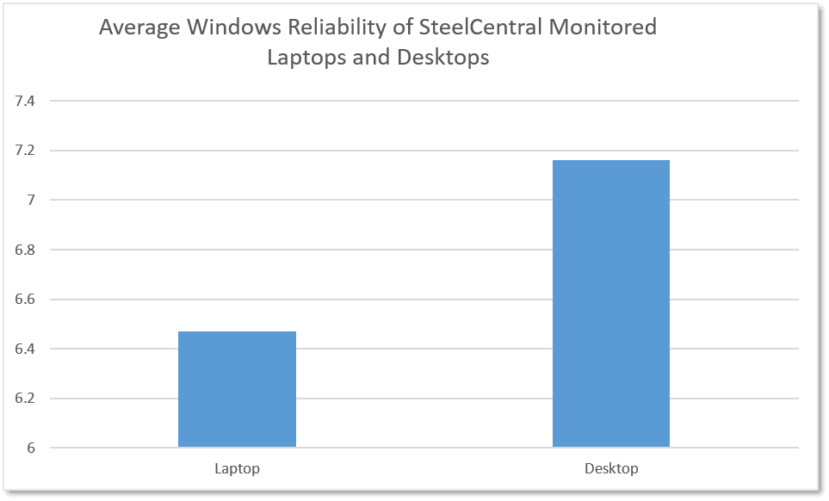 Laptops have Windows reliability scores about 10% lower than desktops.

Windows reliability for laptops and desktops, by manufacturer

This trend holds true across the three manufacturers with the most Windows devices being monitored by SteelCentral.  For each of the three vendors, desktops outscore laptops in Windows reliability. 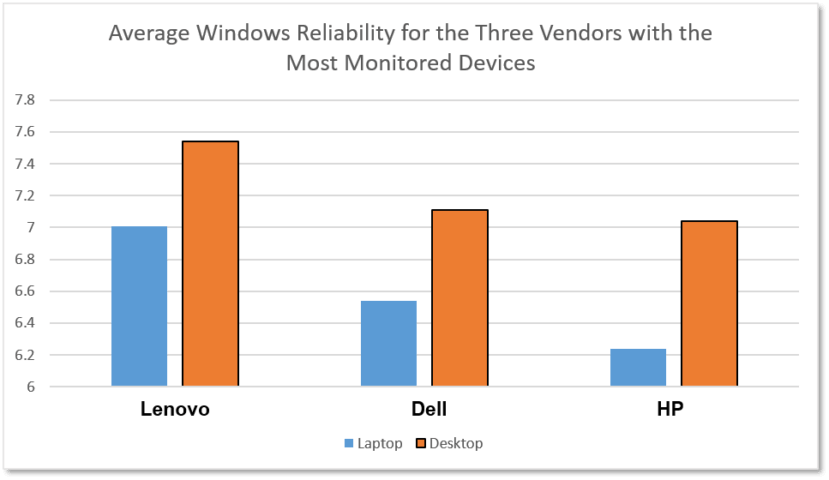 Windows reliability scores are higher for desktops than laptops, for all three of the top vendors being monitored.

The results are even more dramatic when you add virtual desktops, which beat out desktops. They’re significantly more reliable. A likely explanation for this is that the IT department invests in the stability of the servers and OS images that host and create virtual desktops, since so many users depend on them.

Laptops have the lowest scores for Windows reliability of the four device types.

Surprisingly, our data shows that tablets are more reliable than laptops. Bear in mind that this includes the data for my own laptop, which suffered an unfortunate accident involving a bicycle and a squirrel. The squirrel survived. 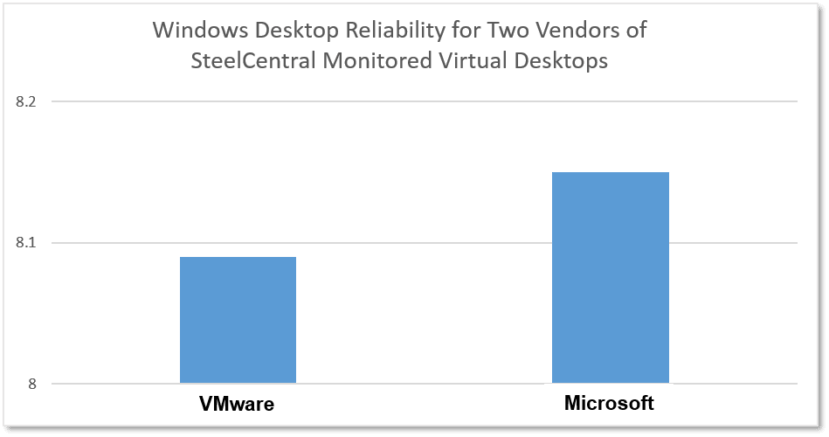 The two vendors with the most monitored virtual desktops had nearly the same Windows reliability scores. 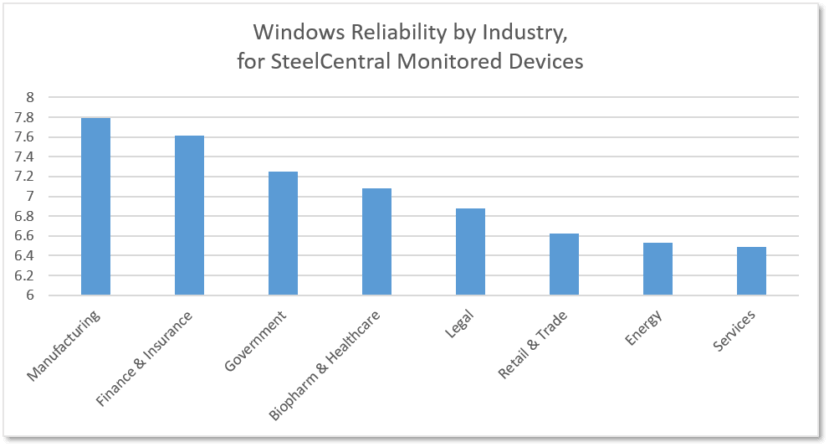 Reliability scores vary by about 20% across industries. 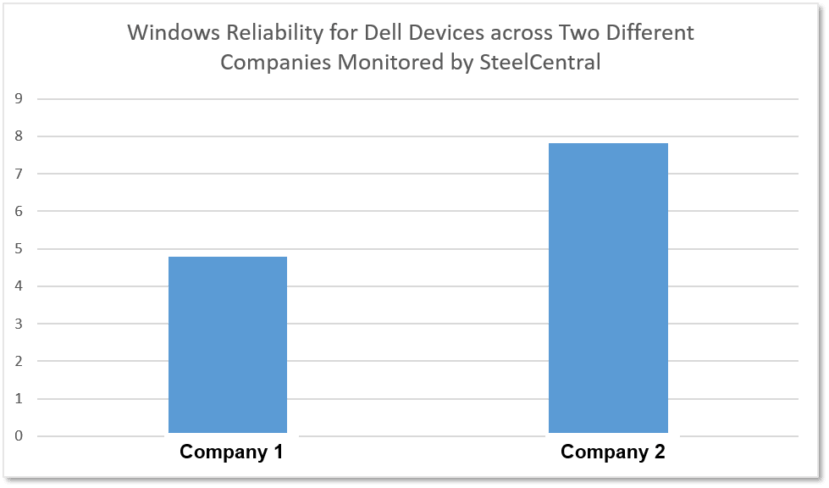 Windows reliability scores for the same device and OS can vary widely across companies, based on the maturity of Desktop Services practices.

This result is not that surprising. A company that carefully builds and maintains its images is likely to have higher reliability.

SteelCentral provides comprehensive digital experience insights across the entire IT infrastructure. From end user devices, such as the one million being monitored today by Aternity, to networks, infrastructure, and applications. SteelCentral enables you to understand performance levels, resolve performance issues and improve service performance. With the SaaS-based implementation of SteelCentral, we can shed light on wider trends, enabling you to measure yourself against others in your industry and region. We’ll provide SteelCentral Digital Experience Insights frequently, to report on other industry trends. Let me know if there are topics you’re interested in seeing.

If you’re a SteelCentral Aternity customer, it’s easy to analyze the reliability of your Windows devices using the Desktop Reliability dashboard. Using this dashboard, you can slice the data according to attributes such as device type, location, and operating system. Understanding the factors involved in reliability is a good first step to improving it.

If you’re not a SteelCentral Aternity customer, sign up for instant access to Aternity running in our cloud environment at:  www.riverbed.com/try-aternity. If you’re attending Microsoft Ignite in September, visit Riverbed at booth 500 in the Expo Hall. We’ll show you Aternity for the use cases you care most about.

Windows 10 migration statistics are everywhere, but they often extrapolate from surveys of ‘representative’ companies. This analysis from SteelCentral is different. It provides a reliable,...
Read More

End User Experience Monitoring: I Bet Your Tool Can’t do THIS! Part 5