Advanced network routing is one of the most powerful features of Riverbed’s enterprise-grade SD-WAN solution SteelConnect EX – definitely one of my favorites. While other vendors took a different path offering the minimum feature set, SteelConnect EX implements all the advanced routing capabilities Enterprise Network Architects need to get full control of their infrastructure, at scale.

So buckle up and let’s proceed.

When you consider a SteelConnect EX branch appliance, it’s not simply an SD-WAN router; it’s a system that runs multiple virtual routers (VR). Why multiple routers? That’s what we are going to address right now. Trust me, it makes our solution one of the most elegant and powerful SD-WAN solution for attaining maximum control.

So what is a virtual router in the first place?

By virtual router, I don’t mean a virtual appliance that you would deploy on a hypervisor. The architecture we are going to review is the same on any type of SteelConnect EX appliance: hardware, virtual and cloud images.

Besides the global routing instance, which is the main one and used for management, there are three types of instances:

What is the benefit of having three types of instances? Let’s have a look at how we are using those VRs for SD-WAN.

Roles of the Routing Instances for SD-WAN

A simple way to summarize the role of each instance would be the following: 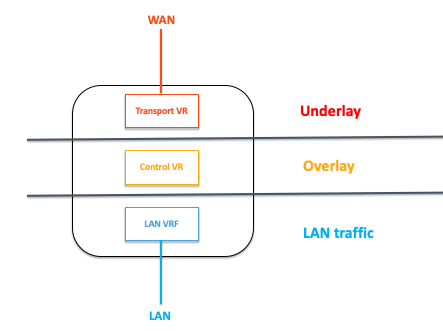 Let’s consider connecting to a server hosted in another site across the WAN. This site is also equipped with a SteelConnect EX gateway.

Our workstation will send traffic to its default gateway and will eventually hit the LAN VRF. The first thing that the appliance will do is a route lookup. Since the other site is also part of the SD-WAN overlay, the Control VR will advertise the server subnet to the LAN VR. Thus the packets will be routed to the Control VR, which is going to encapsulate in the overlay tunnel.

The tunnel is going over the Transport circuits. Depending on the SD-WAN policies, the uplinks will be bonded (by default) or App-SLA based path selection rules will kick in and steer the traffic in a particular uplink.

The overlay is a tunnel built on several layers of encapsulation: 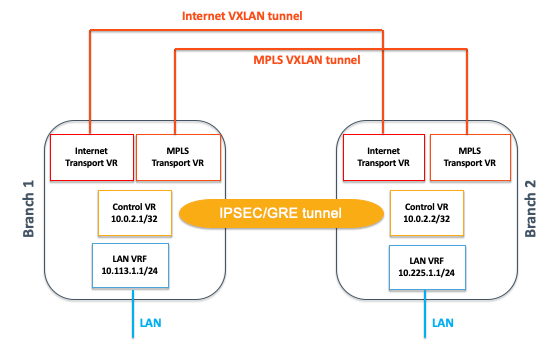 Wait! Why do we have so many encapsulation happening? What is the impact on performance? I know these questions popped up in your head as you were reading the previous section.

Let’s rewind a bit and discuss the VXLAN piece first. Within a transport domain–by default and unless specified otherwise like creating Hub&Spoke topologies–all gateways will automatically form VXLAN between each other. As a result, two sites with an MPLS-A uplink will have a VXLAN tunnel between each other. If one site is Internet-only and the other MPLS-only, they won’t form tunnels; the only way for those two sites to communicate with each other will be to go to a hub connected to both transport domains.

VXLAN is a well-known technology in data centers that build Layer 2 networks on top of Layer 3. It uses flow-based forwarding and is known as being more efficient than a traditional Layer 3 routing that routes packets separately. Furthermore, VXLAN can scale much better than other tunneling technologies like IPSEC with an address space that can go over 16M entries.

On top of VXLAN, various IP transport tunnels can be implemented. In the case of SteelConnect EX, the Control VR will build IPsec over GRE for untrusted networks (by default) or simply GRE for the trusted ones.

Other SD-WAN solutions on the market form IPSEC tunnels on each uplink–most of them are always-on and rarely on-demand, otherwise performance is penalized during switchovers. In a full-mesh network, the complexity is O(n^2), in fact, O(n^2 x L^2) where n is the number of sites and L the number of uplinks, which becomes very quickly resource angry on a system.

Since Control VRs are creating only one IPSEC tunnel with remote sites, no matter how many uplinks there are, we have a much more efficient system that can very quickly failover in case of a WAN outage whilst consuming less resources.

All the encapsulation happens in the Control VR.

As you can see, an MPLS (VPN) label is attached to each LAN VRF. MPLS? Yes! We are leveraging MPLS technologies, too: Control VRs are forming a Virtual MPLS Core network.

In total, the overhead is 58 bytes for encrypted traffic hence the MTU would be 1342 bytes by default.

To be exact, enabling each path resiliency feature (like FEC, packet replication or packet stripping) would add 12 bytes of overhead each.

Now that we have a better understanding of the system architecture and the overlay mechanism, let’s have a look at the routing between VRs. Split tunnels refer to the menu that will be used to pre-configure the inter-VRs routing using Workflows on the Director.

When I teach a class on SteelConnect EX, I usually ask engineers in the room what they would need to do to have a packet routed between LAN and WAN with the following diagram: 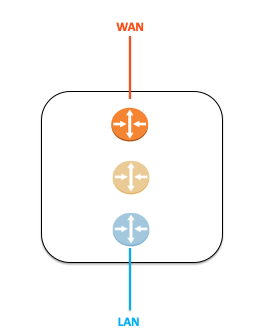 The first thing we need to do is interconnect the routers with a cable. We also need to set an IP address on each of the routers’ interfaces. Finally, we need some sort of routing: static routes or a dynamic protocol like BGP.

It may sound obvious, but bear with me, this approach is super helpful to picture how the system works. On SteelConnect EX, the creation of all of those items is automatic and the configuration is pushed from the Director:

By default, a tunnel is created between the LAN VRF and the Control VR. BGP peering is established on the routing instances. The LAN-VRF advertises its direct connected subnets to the Control VR so they are visible on the SD-WAN overlay. The Control VR advertises all subnets from the SD-WAN fabric to the LAN-VRF. When you leave the split tunnel configuration empty, this is what happens.

During the template creation using Workflows, when the split tunnel is configured between the LAN-VRF and the Transport VR (say MPLS) with no options ticked, this is what we call the passthrough mode.

What happens when we implement that?

A tunnel is created between the LAN VRF and the Transport VR (here MPLS) to directly interconnect them. BGP peering is established between the two routing instances, which allows the LAN VRF to be aware of underlay subnets as well as the LAN VRF subnets to be advertised on the MPLS network. This is helpful in a hybrid deployment where SD-WAN and traditional routers will coexist. 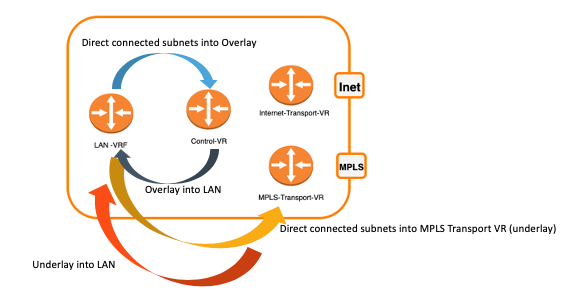 Again, leveraging the power of automation, when we select the option DIA in the split tunnel configuration, many things happen in the background to achieve your goal, which is to put in place direct Internet breakout. 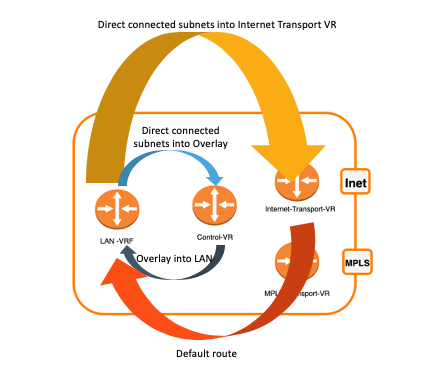 Finally, the last option is to select “Gateway.” 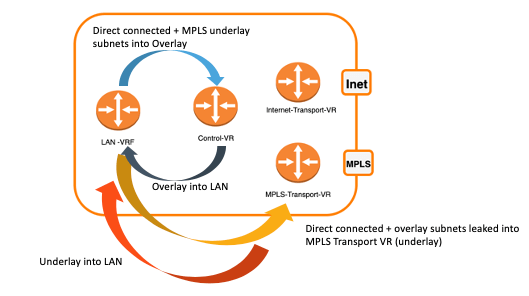 This feature allows you to implement transit use cases between the SD-WAN fabric and underlay networks, as well as disjoint networks.

Today, we have learned that SteelConnect EX grants full control and flexibility to build the SD-WAN fabric on top of the traditional network.

There are three types of routing instances with different roles:

What we did not cover here is the multi-tenancy capability of the solution and this will be addressed in the next blog.

A question, a remark, some concerns? Please don’t hesitate to engage us directly on Riverbed Community.

The holiday season is just over and while I was looking at my kids taking apart their brand new toys—and telling them they probably should...
Read More

We continue our learning journey on SteelConnect EX, Riverbed’s Enterprise SD-WAN offering. This time, we are going to address one of the hottest and most...
Read More

The SteelConnect EX portfolio has expanded its power and flexibility with the addition of three new enterprise SD-WAN appliances: EX-385, EX-485, and EX-685. Ideal for...
Read More