Have you had a poor experience with Microsoft Teams such as call drops, bad call quality, crashes or high resource consumption? In the post-pandemic world, MS Teams has become one of the key productivity tools most of us are using to collaborate with colleagues and customers. To stay productive and efficient in hybrid workforce, MS Teams experience should be best-in-class from anywhere the users are connected from.

On 21st of July, MS Teams customers faced a global outage issue which impacted users mostly in Australia, New Zealand and neighbouring ASEAN countries. Did your IT team detect the outage before the users noticed? How did your IT team mitigate the influx of service desk tickets about this outage?

For now, let’s start with the basics—understanding how users access the application.

Where are users accessing MS Teams from?

Users could be accessing Microsoft Teams from across different locations, offices or even their favourite café. It is helpful to group the type of users based from where they are connected–the company headquarters, branch offices or remote locations.

Alluvio provides a holistic view of every call made on Microsoft Teams. The dashboard below shows the distribution of call quality, identifies the jitter and latency over time and analyses the corporate and non-corporate traffic going through your LAN and WAN.

Alluvio provides a hop-by-hop analysis of communication from user machines, switches, routers, public internet and backend server. Alluvio also analyses the traffic when remote users are directly connected to the server through the internet. This way, we know which server is being used that could potentially cause latency issues. For example, if the user is based in Australia and the application was communicating through a server in the US, the user will experience high-jitter and high-latency due to the distance from which the packets send the data to. IT teams can then redirect this traffic through a local server for better performance. Having visibility is the key to target what and where the fix should be done!

Another way to monitor call quality is by analysing network packets for each call. Riverbed Alluvio can identify the MOS CQ, post dial delay, and jitter on each call. 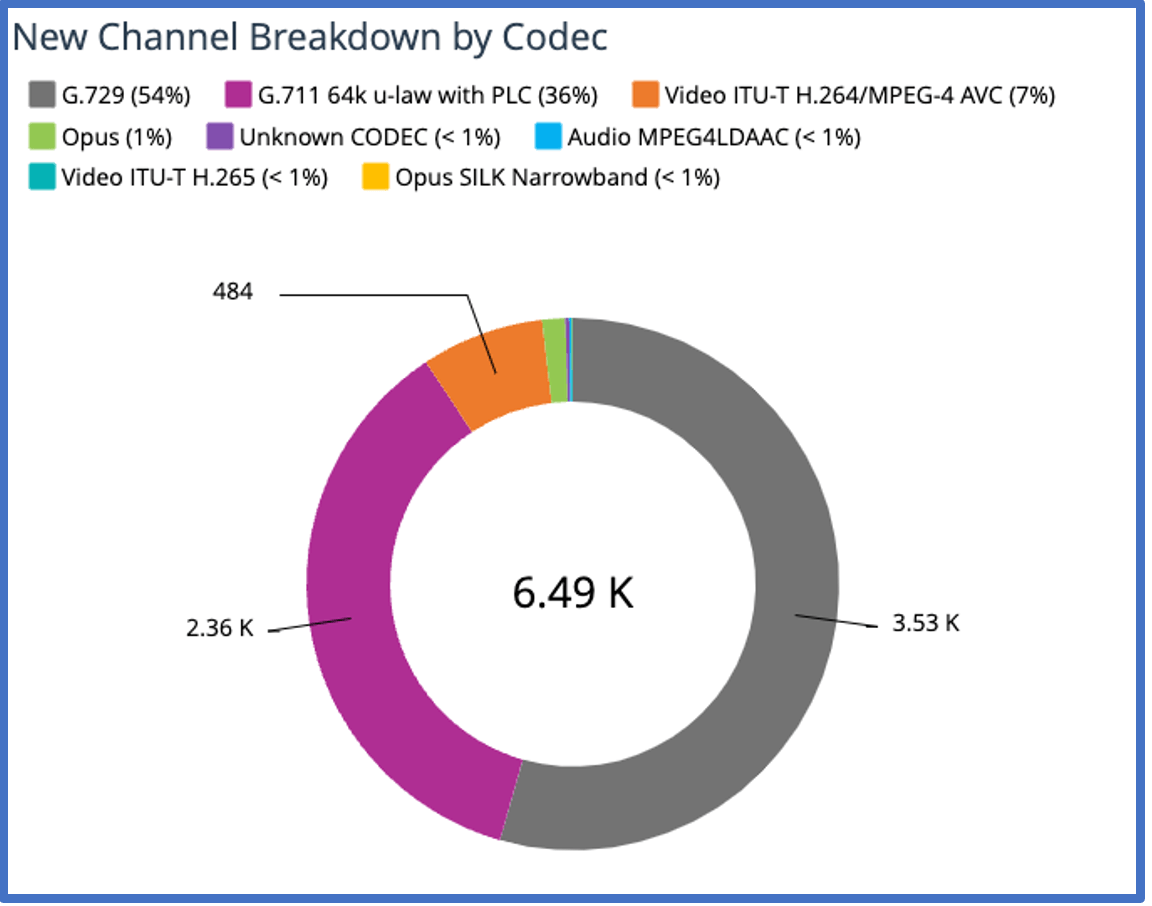 Alluvio can help identify the access points where users experienced poor MS Teams call quality in the corporate network. All these metrics can help you identify the source of poor performance and help you enhance the user experience.

Alluvio gives you all-round performance and experience insights for Microsoft Teams across your organisation. Alluvio can provide visibility on usage, activity response times, audio and video call quality, resource consumption of app, and crashes and errors.

Alluvio can show the number calls with high latency, jitter, and packet loss out of total the calls made. You can easily identify the call quality trends and investigate each user’s call which showed as poor quality. Each dot in the dashboard below represents a user call.

Alluvio shows insights on response time of user discrete activities, such as launching the app, join in the meeting, sending a chat, and the breakdown of the response time. You can easily identify the domain that contributes most on the delay—client device, network, or backend. It can also show the impacted user commonalities on the slowness by business locations, server, etc. 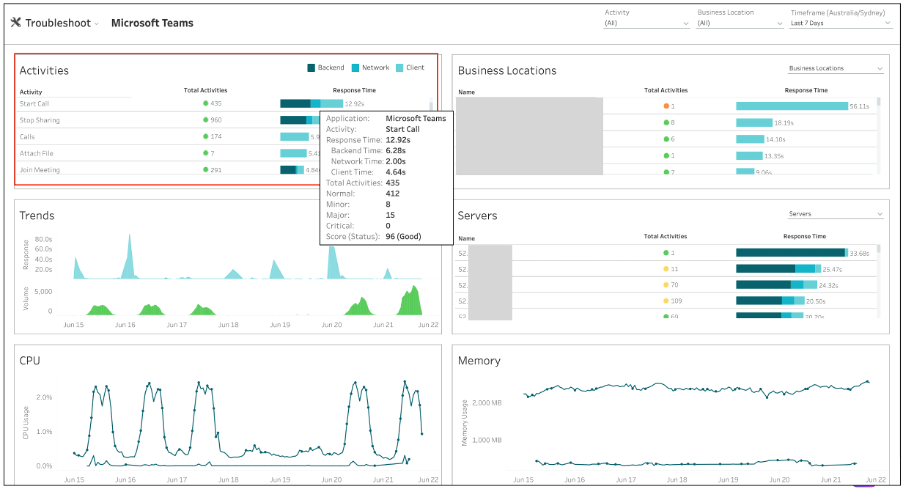 Alluvio can monitor crashes and capture the errors codes to help IT teams find the root cause and identify the commonalities on users impacted by software version, model of devices, connectivity, and more. 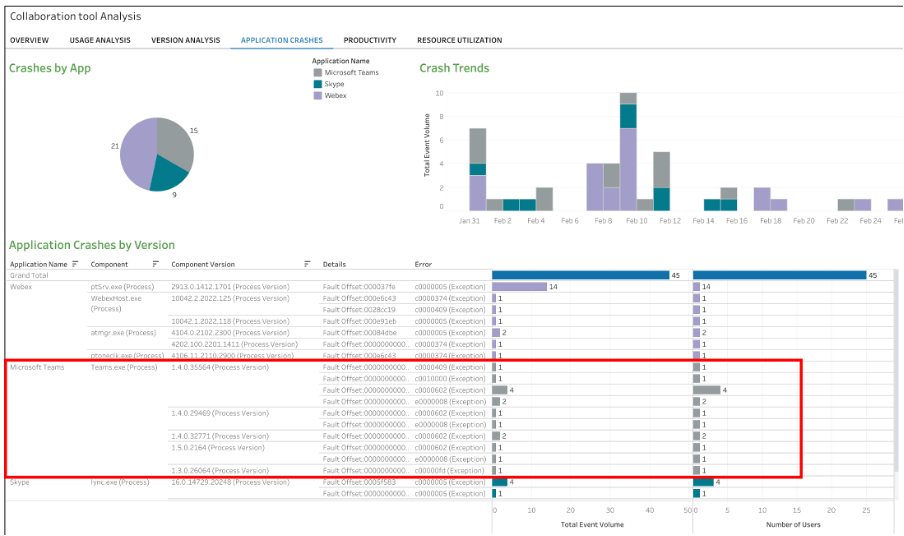 A global outage issue was reported by Microsoft Teams users on the 21st of July, 2022 around 11:15AM AEST and lasted for about 2.5hrs. Before our customers start to notice, Alluvio Aternity detected the change on the app behaviour and sent email notifications to the IT team about the low usage. This outage alert is done through our machine learning capability called Anomaly Detection. 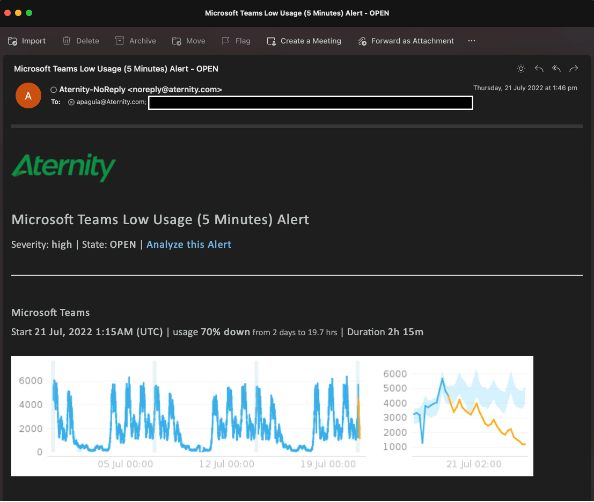 The incident, detailed below, shows the traffic highlighted in yellow is the normal usage time of MS Teams. Then, at the time of the outage, there was a sudden drop on usage time and number of users, which is highlighted in purple. 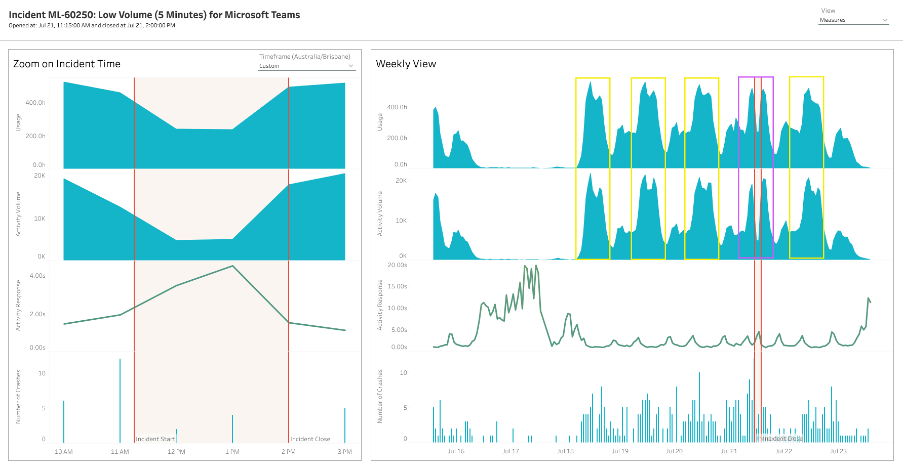 Alluvio Aternity detected the outage and alerted the IT team. This helped the IT team to take action before anyone noticed the issue, allowing them to proactively communicate to users that an outage may impact them and that IT will provide an update once the issue is resolved.

This proactive engagement from IT resulted in:

Alluvio can help fix the issue, without the need to remotely connect to user devices, through Auto-Remediation tagged to alert detection. Alluvio Aternity can clear the cache to help L1 support teams fix common issues with Microsoft Teams. No disruption on user productivity time!

Below are the list of MS Teams issues getting resolved after removing the MS Teams cache:

As we move from remote working to hybrid work environments, it is increasingly critical that we use unified observability to proactively improve application performance and the user experience, no matter where they are.

If you are interested in learning more about how Alluvio can help you improve the overall performance and user experience in MS Teams, get in touch with us and let’s have a conversation.